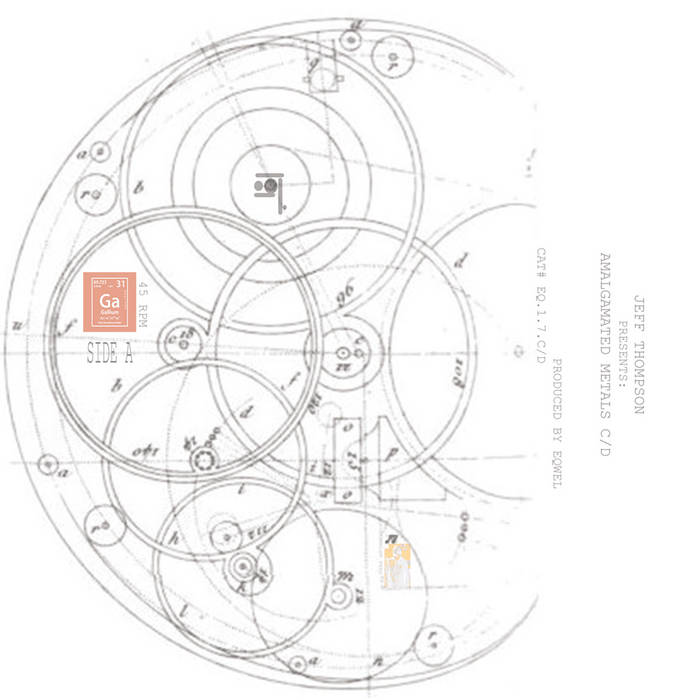 This series dives into metals (Side a) Gallium and (Side b) Iron Ferrum.

Side A:
Gallium is a chemical element with the symbol Ga and atomic # 31, which gives this track a powerful techno sound and breaks down it’s elemental form to a soft, silvery metal at standard temperature & pressure.This is evident during the middle of the track, where it’s liquid state becomes a silvery white that represents the emotional aspect of this track. If too much force is applied, the gallium may fracture, so the build back up of the relentless techno sound is crucial. This track has similarities to the other metals of the group aluminum from Amalgamated Metals B; Jeff Thompson’s previous release of this series. Listening to this track and it’s breakdown you can see why Jeff Thompson labeled this track Gallium. Gallium is predominantly used in electronics.Gallium arsenide is the primary chemical compound of gallium in electronics and is used in microwave, high-speed switching, and infrared circuits. Semiconducting gallium nitrate and indium gallium nitride produces a blue and violet light emitting diodes (LEDs) and diode lasers. Gallium is considered a technology-critical element, hence techno!

Side B: Iron Ferrum is a chemical element with symbol Fe and atomic # 26. It is by mass the most common element on Earth, forming much of Earth's outer and inner core. It is the fourth most common element in the Earth’s crust. In its metallic state, iron is rare in the Earth’s crust, limited mainly to deposition by meteorites. This is the reason for the atmospheric sound of this track. This element has been fallen down from space via a meteroite. Iron ores, by contrast, are among the most abundant in the Earth's crust, although extracting usable metal from them requires kilns or furnances capable of reaching 1,500 °C (2,730 °F) or higher. Pristine and smooth pure iron surfaces are mirror-like silvery-gray, which is why this track is so light and airy. The body of an adult human contains about 4 grams (0.005% body weight) of iron, mostly in hemoglobin and myoglobin. These two proteins play essential roles in vertebrate metabolism, respectively oxygen transport by blood and oxygen storage in muscles. To maintain the necessary levels, human iron metabolism requires a minimum of iron in our diet. Iron is also the metal at the active site of many important redox enzymes dealing with cellular respiration and oxidation and reduction in plants and animals.Based on the facts above, you can see why this track is so light and soulful, because this is what runs through out divine human body, that has been breathed into us by our almighty GOD.