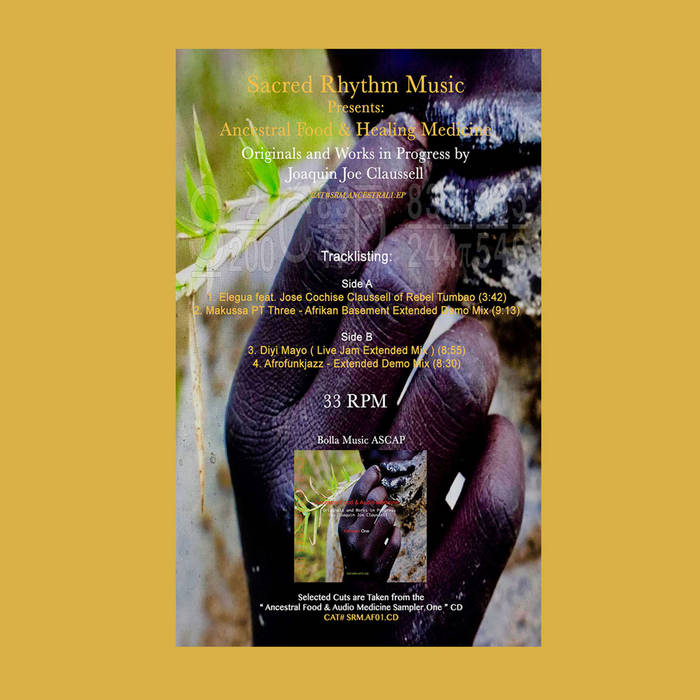 Here is the Link for the CD:
sacredrhythmmusic.bandcamp.com/album/sacred-rhythm-music-presents-ancestral-food-audio-medicine-super-limited-cd-new-release

Randomly selected from the HD vaults spiritually protected at Sacred Rhythm Music; We invite you to take part into listening, dancing, spinning and ultimately healing by the way of a few musical works in progress-demos and ceremonial oeuvres, as well as a couple of earlier released compositions imagined and produced by Joaquin Joe Claussell. Also Included are some never before released rhythm tracks and sound effects, both of which helped to lay the foundation for musical structures that were released in the past and can now be used as overlay tracks and DJ creativity.
As with mostly all original works created by Joaquin Joe Claussell; The vibrational medicine that emanates from the music (if taken seriously) can assist in healing the confused mind back to its original state of intellectual and wholesome consciousness. We believe that once the mind is strong and clear again, all that are both profound and worth keeping will then surround us…
We live in a chaotic world where everything’s turned upside down. And so, if you find yourself stuck, confused-depressed and you haven’t a clue to whom or where to turn to for help: Just remember that, Music and Love-that’s unconditional-are always there for you when you need them to be. All you need to do is to believe.